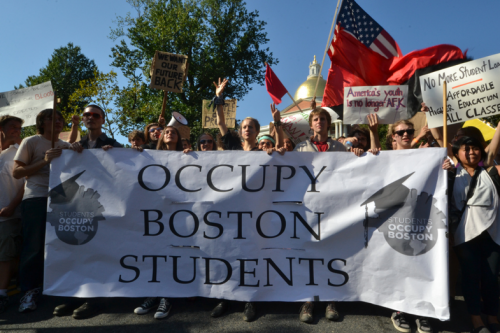 Occupy Wall St. has been granted a reprieve after Mayor Bloomberg and Brookfield Properties threatened to evict them today for a “park clean-up.” Protesters were reportedly elated as the announcement boomed over the “people’s mic” at 6:40 AM, spilling out into the streets. Of course, the eviction has only been delayed, not eradicated, and eventually the occupants will be forced to make their next move. Many are wondering: what will be their next move? And more importantly: does it matter?

In Boston, LA, DC, Austin, Philadelphia, Portland and many cities across the nation, Occupants are taking a stand against corporate greed and the growing wealth gap. Fellow Americans watch them on television screens, newspapers, and twitter feeds, or even out their windows and wonder: what is this? Does it pertain to me?

With young people at the helm of the occupy movement, universities also seem to be at the epicenter of this media frenzy. Almost as soon as Occupy Boston set up their tents, people on my campus had developed “Occupy fatigue.” Some students whined for the pre-Occupy days when everyone could be apathetic in peace. Now, it seems students have to justify not caring.

What lies at the root of this Occupy skepticism? Why are some young people so charged up that they are camping in the streets, while others are rolling their eyes? Here are some critiques of the Occupy movement floating around bars, tables and in dorm hallways:

Regardless of the merit of these critiques, I'm glad these conversations are happening. And if I’ve learned anything in 3.5 years of a Peace and Justice Studies major, it's that movements tend to get a facelift in hindsight. Generations after a major period of action, people turn time-tinted lenses back and see wise, courageous revolutionaries guiding altruistic and equally wise individuals to march against the obviously evil powers-that-be.

Consider the civil rights movement without the corrective lens of hindsight. You will see a Martin Luther King who struggled with himself. You will see an array of affiliated organizations whose opinions were seldom unified; their policy positions never clear. You see determined yet frightened activists who often needed years convincing to speak out against a bigoted government.

Already, it seems spectators are looking at the momentum of the Occupy movement through the corrective lens. They look for an inspirational face of a leader or individual that represents the movement. The Obama campaign had that, but Occupy Wall Street does not. Summarizing a movement with a face may be good for media coverage and may make writing history books a bit easier, but that does not mean it’s a weakness of the Occupy movement.

Indeed, the Occupy movement may not have a clean, infallible facade, but it does have an expanding membership of motivated individuals, frustrated with traditional politics’ inability to address the growing wealth divide and willing to work for an alternative solution. What it does have is a wide net that is cast over organizations with similar goals. What it does have is political opportunity in the widespread dissatisfaction among Americans. These are the ingredients for change.

I am a college senior looking out into an abyss of unemployment and slim job prospects. It pains me to hear Republicans repeatedly shoot down jobs bills and progressive measures to bolster economically stimulating public funding. As a voter, I am sorry that the ‘liberal’ candidate for 2012 has sacrificed progressive policies for wishy-washy centrism too weak to pay off crippling debt. I am scared, but I’m ready to do something about it.

I say, even if you can’t define ‘em, join ‘em.  Even if you’ve never been formally educated on economic issues, let the movement occupy your mind for a moment. Get informed about our gargantuan wealth gap, corporate influence over the government, or racial and gender economic disparities. There may not be a leader handing out a one-shot solution, but there’s a group of people asking for new ideas—and why shouldn’t you have a say?

We can allow ourselves to believe in change. The media has hyped this up so much it seems like a fad, but even if Occupy Wall St. is evicted the protesters’ flame will not be extinguished. Because the Occupy movement is more than a bunch of tents in a park. It is a coalition of the willing, a call to action, and a harbinger of change.