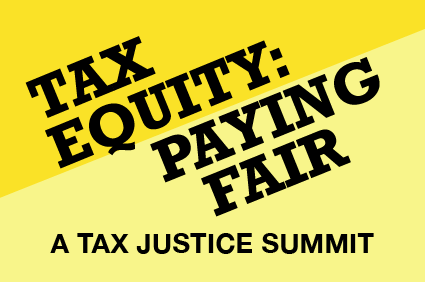 Washington D.C. - With tax day just around the corner, experts from some of the country's leading progressive think tanks and advocacy organizations are coming together for a far-reaching and lively discussion of the current state of tax policy. The roundtable discussion at the Capital Visitors Center on Wednesday, April 11 from noon to 1:30 will be moderated by Nation columnist John Nichols. Panelists will include:
Dean Baker of the Center for Economic and Policy Research
Mike Lapham, Director of the Responsible Wealth project at United for A Fair Economy
Elspeth Gilmore, Co-Director of Resource Generation
Chuck Marr, Director of Federal Tax Policy at the Center for Budget and Policy Priorities
Robert McIntyre, founder of Citizens for Tax Justice
Rebecca Thiess, Federal Budget Policy Analyst at the Economic Policy Institute
The briefing will focus on inequities in the tax code and how to make the system fairer. It will be followed by questions from the audience and media in attendance. The event will be streamed live, and questions can also be submitted via social media.
"This is an extremely important conversation," states Mike Lapham, director of the Responsible Wealth project. "The expiration of the Bush-era tax cuts at the end of the year presents an opportunity for lawmakers. The richest taxpayers have reaped enormous benefit from tax cuts on investment income and reductions in the top marginal rates on earned income. We have the opportunity to do away with the Bush tax cuts once and for all and to revise the tax code so that it raises enough revenue to stop the budget cuts that are weakening the country and damaging our economy."
Registration is required to attend the event in person. RSVP here. In addition to congressional staff and the media, the event is open to the general public. Lunch will be provided.
Event details:
Tax Equity: Paying Fair
Wednesday, April 11. Noon - 1:30
Capital Visitors Center, room SVC 201-00
Lunch will be provided
Topics covered will include the lower tax rate on investment income vs. earned income; the mischaracterization of high-end salaries as investment income; off-shore tax avoidance schemes; corporate tax loopholes; the estate tax; the income cap on Social Security contributions and more.
The panel is hosted by the Americans for Democratic Action Education Fund. The ADA Education Fund is the sister organization of ADA, the nation’s longest-established liberal advocacy group. The Congressional Progressive Caucus is the honorary host of the event.

"How to achieve tax fairness will be one of the central policy debates across the country in this election year, and especially in the weeks leading up to Tax Day on April 17," explained Will Rice of the ADA Education Fund. "Our all star cast of tax fairness experts will inform that debate with valuable information and insights for Congressional staffers, the general public and the media."
RSVP here. For more information, interview requests, details about remote participation and all other inquiries contact Karen Traeger at 202-785-5980 or [email protected], or Tim Sullivan at 617-721-8741 or [email protected].
###
United for a Fair Economy is a national, independent, nonpartisan, 501(c)(3) non-profit organization located in Boston, MA, which advocates for progressive economic and tax policies.
The ADA Education Fund is an independent, charitable entity that focuses on increasing public awareness through education. The Ed Fund produces periodic policy briefs, hosts progressive speakers on a range of issues, and sponsors Galbraith research fellowships.  Its Congressional Briefing series began last year and has covered topics ranging from Social Security to marriage equality to youth unemployment.
Do you like this page?
Support our work. Give here:
Tweet