Supporting a Week of Action to Raise North Carolina Pay

Last year, Raising Wages NC joined workers rights organizations from around the state in our first ever #RaisingWagesNC week of action during the labor day holiday.

From September 2nd to the 9th, 2017, churches, labor, and community-based groups across North Carolina came together to fight for workers rights and to raise awareness of the urgent need to raise our state’s minimum wage. The week of action emphasized that increasing the minimum wage to $15/hour in stepped phases over a period of years.

We are happy to highlight and provide coverage of a number of different events.  Most have been occurring for many years, part of a proud tradition of organizing in the South that doesn't always get the attention it deserves. Please check out each event’s sponsoring organization for more information on how to get involved. We are covering these events on our blog because we believe it is important to highlight and uplift the important work being done in the South.

If you haven’t yet, take a moment to sign the petition to raise the minimum wage in NC. 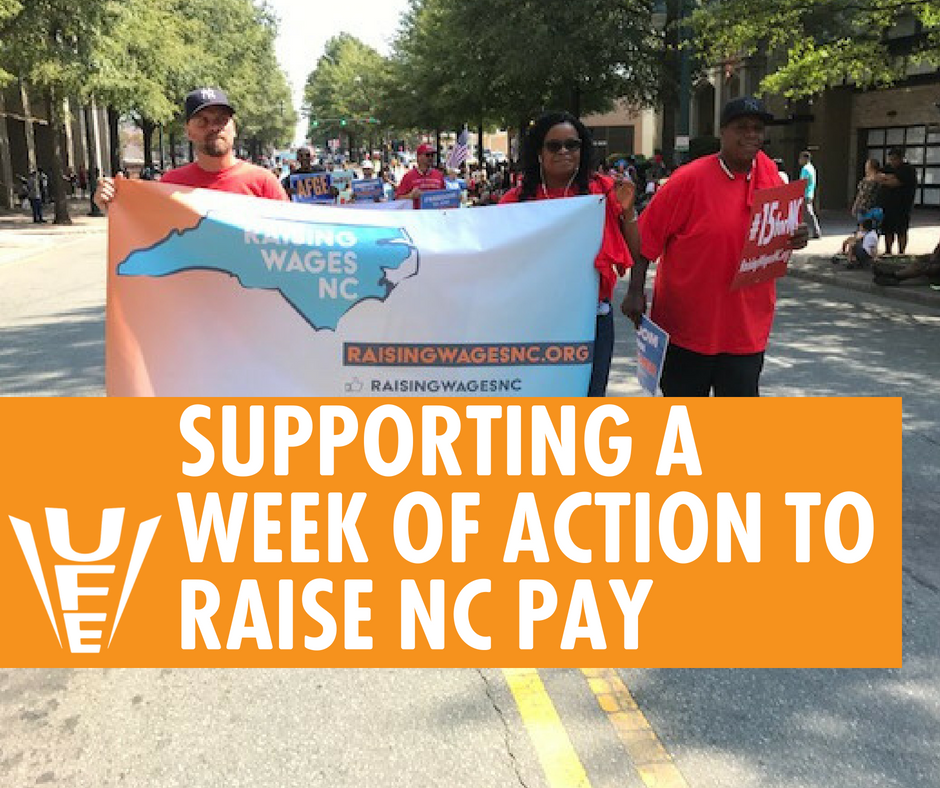 Carolina Jews for Justice Wake County chapter organized an educational program on the history of Jewish action for unions and higher wages. Participants were looped in to the statewide campaign for a livable wage. Professor David Zonderman lectured and facilitated a discussion for over 40 participants, many of whom signed the petition and asked to be notified of future Raising Wages NC actions. The discussion even inspired a few people to attend the rally in Durham on Monday.

Fight for $15 and allies hosted a rally and march in Durham. Speakers shared their stories, urged legislators and government officials to raise NC’s minimum wage to $15 an hour.

Just Economics had their own float in Canton’s annual parade, distributing handouts and flyers while drawing attention to NC workers’ need for a living wage.

Organized by labor unions, the celebration brings the community together each year to honor and recall the history of organized labor and the benefits it has brought to all. Many coalition members were there-- including Communications Workers of America (CWA), and the NC State AFL-CIO.

Carolina Jews for Justice & Just Economics screened a grassroots documentary about living on a low wage, which included a workshop and panel discussion- all addressing poverty through an interfaith lens.

Partnering with Communications Workers of America and El Pueblo, RWNC helped hold a Popular Education training on economic justice. Participants learned the history of wages and productivity, explored the root causes of economic inequality, and took steps to get more involved in efforts to raise NC’s wage.

Just Economics of WNC gathered with the community to celebrate and honor workers during the week of Labor Day! They handed out love letters with personal messages to workers along the march route.