We at United for a Fair Economy recognize that we are in the midst of a disaster, a world-wide public health and economic crisis not witnessed in living memory.

Building a more fair economy capable of better responding to crises requires a more equitable allocation of resources to communities that have been historically disadvantaged or exploited. As we’ve seen with natural disasters in places like New Orleans and Puerto Rico, crises compound already existent inequalities, causing devastation for people of color in particular, while generating opportunities for a powerful few. Uplifting these marginalized voices is the best way to move forward and ensure lasting, economic change that benefits everyone, not just the wealthy. 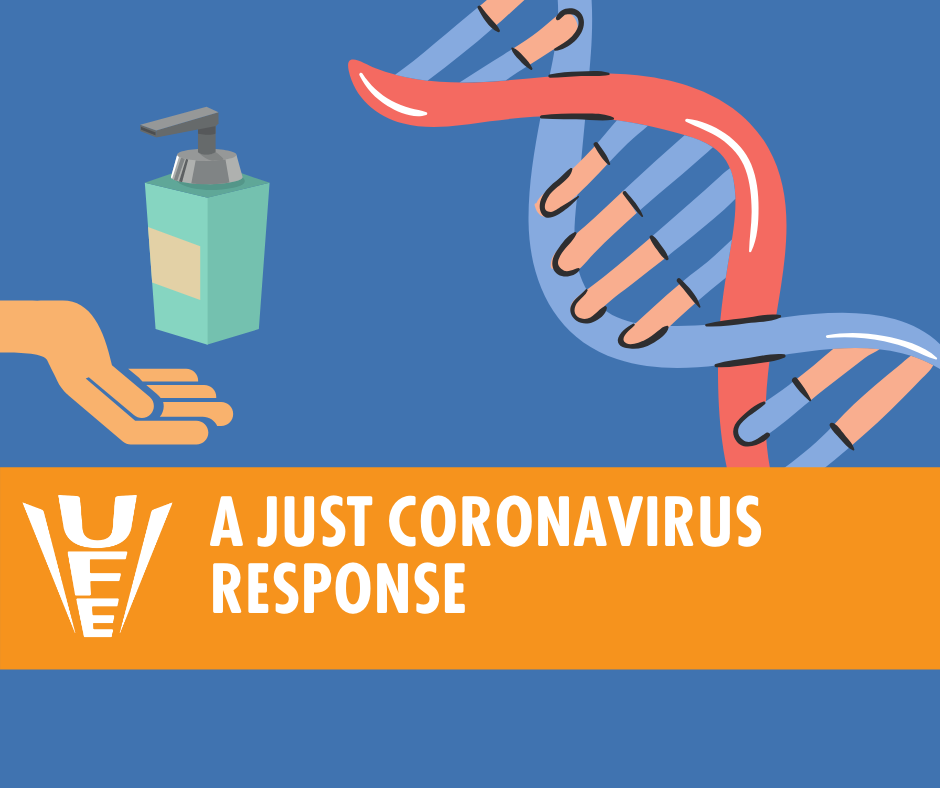 United for a Fair Economy will be working to support communities fighting for fair policies and equitable paths forward during this time of increased need. Here are some steps we are taking right now:

Public fear can quickly be transformed into a political tool used to drive our communities apart. Now, faced with a global pandemic and economic crisis, we cannot allow xenophobia, racism, and fear to disrupt the incredible progress we’ve made.

In spite of the election of Donald Trump and his corporate allies, movements like Black Lives Matter, the Fight for Fifteen, and #MeToo have all risen up, often in powerful alliances and coalitions, to create a more just world. We’ve seen minimum wage workers rise up and win raises in numerous states, with a federal minimum wage increase being considered seriously for the first time since 2009. We’ve seen domestic workers, immigrants, and women stand up for benefits and dignity in the workplace and win historic Domestic Workers Bills of Rights in nine states so far.

Similarly, since the start of the Coronavirus outbreak, we’ve seen people coming together with nonprofits and other supportive groups to raise funds and take care of one another during this time of desperate need. This kind of mutual aid is necessary, particularly for poor people, people without health insurance, and people for whom government support has been historically absent. But mutual aid is not enough.

Is it enough to get the stock market back to “normal” if millions of people can’t pay rent, don’t know where their next meal will come from, can’t see a doctor, and are living paycheck to paycheck? Is this the “normal” economy we want to return to? The one that undermined and stripped away the very institutions and safety nets needed to be strong and resilient in a crisis?

True equality is achieved when our solutions recognize hundreds of years of social injustice. The economy will only be able to manage a crisis effectively once the playing field is level and people have equal capacity to survive. Low-income workers, including service workers, tipped workers, domestic workers, gig workers, farm workers, and other jobs dominated by women, immigrants, people of color, and people with disabilities, will be particularly impacted by this crisis. As always, we must ensure everyone’s voice is included in the decisions that must now be made and work to support the most marginalized members of our community.

Any just economic stimulus package must also account for the widening racial wealth divide. Unfortunately, many of the most vulnerable people will be the very same who have been held back for too long because of systemic racism, sexism, homophobia, and other forms of injustice. For decades the wealthy elite have worked to dismantle social safety nets and shift wealth from everyday folks to the top, and wealth inequality today is at record-high levels. It’s no wonder people are panicked when a crisis hits. What is needed now is a new social contract and an economy that benefits and protects everyone, not just the powerful elites.

The future of our country and the world is at stake. We cannot afford regressive policy at a time like this. We can’t settle for half-measures, by government or by business. We must be on the lookout for divide-and-conquer tactics and anything less than solutions that leave no one behind, include ALL workers, and account for all peoples. Now more than ever, we must come together across differences of race, class, and gender to make our demands known and build a better, more fair economy.

If you are in need of resources to support you through this crisis, you can find a nationwide list of localized resources HERE.

In Solidarity,
The United for a Fair Economy team