A Victory for Rights in Massachusetts 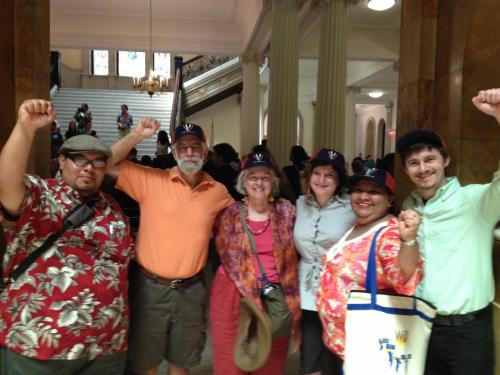 On Wednesday, July 2, the UFE team joined our sisters at MataHari: Eye of the Day – an organization of women of color, immigrant women and families that works to end exploitation and gender-based violence – at the Massachusetts State House for a momentous occasion: the signing of the Massachusetts Domestic Workers’ Bill of Rights.

The bill guarantees basic protections and standards for domestic workers: 24 hours off per 7-day calendar week and 48 hours off per month; meal and rest breaks; limited vacation and sick days; parental leave; protection from discrimination, sexual harassment, illegal charges for food and lodging, and eviction without notice; notice of termination; and a means of enforcing these standards. MataHari and the rest of the MA Coalition for Domestic Workers have been working on and advocating for the bill since 2011 and were instrumental in its passage.UFE is proud to have worked with MataHari, using our signature Training of Trainers program and other workshops to provide tools and techniques to enhance their organizing and advocacy efforts. Over the last year, and funded in part by a grant from The Berger-Marks Foundation, UFE’s Jeannette Huezo led a series of interactive workshops for MataHari on organizing strategies, leadership development, contracts and negotiations, immigration policies and reforms, and the Domestic Workers’ Bill of Rights. This bill was a victory for workers’ rights and equality, and we are proud to support the cause.

The signing was an exciting and proud event. It began with speeches from Lydia Edwards of the National Domestic Workers Alliance, Governor Deval Patrick, and Attorney General Martha Coakley. Then two domestic worker activists (including MataHari’s Angella Foster) shared their experiences and spoke about the importance of the bill. Next, Boston Mayor Marty Walsh and Senator Anthony W. Petruccelli (sponsor of the bill) spoke to the crowd. Finally, Governor Patrick signed the bill and the celebrations began.

I interviewed MataHari’s Director, Monique Nguyen Belizario, about the bill. Here’s what she had to say…

Q: What does the passage of this bill mean for domestic workers in Massachusetts? 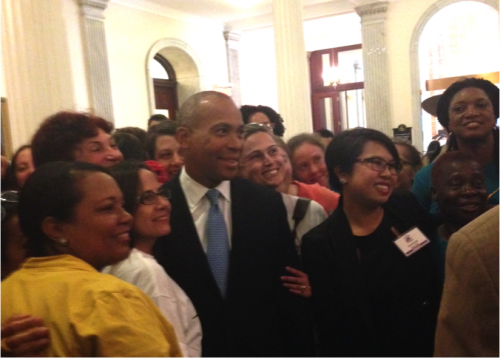 A: It means recognition and respect for the important work that domestic workers do. For so long domestic workers have been marginalized and left out of these conversations. In the 1930s and 40s when labor laws were being written in the U.S., domestic workers were left out because many were freed black slaves and they wanted to be able to continue to exploit them. That injustice still has not been completely made right to this day, so this bill is a big step. It provides a lot of rights that most workers take for granted. This is also a feminist issue, since most domestic workers are women and domestic work is a commodified version of women’s traditional role in the household.

Q: How long has MataHari been working toward passage of this bill?

A: The campaign has been going on for about 4 years. The legislation was introduced a year ago. Before that, MataHari did a lot of work with the MA Coalition for Domestic Workers. MataHari has historically always done work with domestic workers. At first, MataHari was working on individual cases of exploitation, but after a few years of that there was a shift to community organizing – survivors wanted to make things right and seek justice.

Q: What was the greatest challenge along the way?

A: Working in the coalition. Organizing is already a challenge – you have to balance making your own organization strong and powerful to get what you want while maintaining your own identity, but also being able to bend and negotiate and collaborate with other groups, legislators, etc.

Q: What are the next steps for MataHari and for domestic workers’ rights nationally?

A: For MataHari, the next step is implementation – passing a law is the glamorous part and many groups stop there, but we are working for social transformation. We’re working now on the “Make It Real” campaign – base building, having conversations with workers and employers, getting commitment from cities to support the bill and offer resources for implementation. After months of work from our Lynn team the city passed a resolution to support implementation of the Bill of Rights in their city. We want to expand on that and work on the local level – it’s up to each local group to decide how they will make it real.

Nationally, there is a push for the federal government to do something about it. The state level work shows groundswell and our sister organizations in other states are contemplating pushing in their own states for something similar, but this should be federal work. In 2010 the International Labour Organization adopted its Convention on Domestic Workers, and 15 countries have signed on, but the U.S. has not. The U.S. should sign on to the Convention and respect the rights of women in our country.