Black Realities and Black Delusion in the Age of Obama 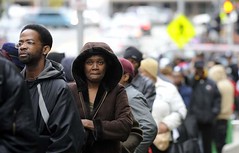 "[...] Last week, the Economic Policy Institute released a study that projects Black unemployment — the official figure — will officially reach 17.2 percent by the third quarter of this year.

In five states, Black unemployment is projected to exceed 20 percent. Those states are Alabama, Illinois, Ohio, South Carolina and Michigan. And in Michigan, it’s projected to reach 27 percent. And we know that it’s already higher than that in Detroit, officially.

These facts are based on the way the federal government measures unemployment. And that means they are gross underestimates of real unemployment. Because they’re based on who actually shows up at a job center in four weeks. They underestimate everybody who is discouraged in the job market. Blacks...stay unemployed much, much longer than whites. They have far more reason to be discouraged than whites. And far more of us never, in fact, even enter the formal job market. Plus there is the huge population of Blacks in prison. Prison inmates are not counted as unemployed. And in some communities, at any given time, that figure exceeds 20 percent of the Black, male, working-age population. So that is a built-in undercount — a huge one. [...]

From the beginning of the current recession, which they date to September of 2007, to the third quarter of this year, white unemployment will have gone up five percent. Black unemployment will have gone up 8.6 percent. And Black people were already living at depression levels in 2007 when we start that count. So we see that there is an even deeper bottom that is falling out of the Black job market. [...] [T]he numbers were derived from the U.S. Bureau of Labor Statistics.

Based on those facts, the headline for the story of the Economic Policy Institute’s research said, 'U.S. unemployment Rate for Blacks Projected to Hit 25 Year High.' That same week another story appeared based on a study by the Pew Research Center [...] That study reports that, 'Black assessments about the state of Black progress in America have improved more dramatically than at any time in the last quarter-century.” Those two headlines are in the same week, and so, on one hand, we have Black unemployment to reach 25-year high, and on the other hand we have Black assessments of Black progress at…[a] 25-year high! So we are in the midst of a great disconnect.

Black perceptions and Black reality are in absolute conflict. They are diametrically opposed. [...]

the truth is Black people have been given the impression that they are materially better off than ten years ago by a relentless media barrage about Black progress. We hear it every day on every channel in every newspaper in every way. [...] The aim of that wall-to-wall propaganda is to declare that the struggle is over, or that the struggle should be over. Barack Obama’s election is put forward as the final proof of that.

We’re witnessing the greatest loss of Black wealth since slavery.

United for a Fair Economy [says] Black wealth is now 10 cents on the dollar of white median household wealth. But that figure is certainly too high.