"At least 4,645 people have died. 4,645 loved ones are estimated to have been lost in Puerto Rico after Hurricane Maria. This number is in stark contrast to the government’s official death toll: sixty-four..."

Today, Free Speech For People and United for a Fair Economy co-released the report Blackout in Puerto Rico. 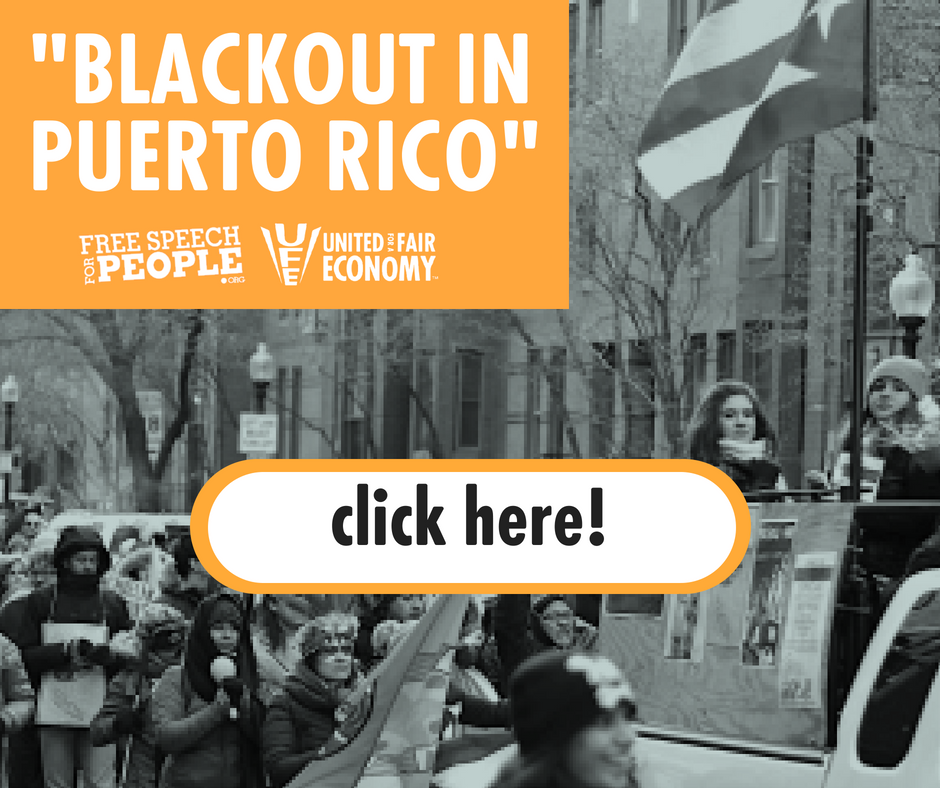 This report discusses the history of political inequality and corporate dominance in Puerto Rico, leading in to an analysis of how the current systems of money in politics affect Puerto Rico’s financial crisis and hurricane recovery efforts. This report takes note of systems of oppression -- in this case, the creation and continuation of political inequality, white supremacy, and colonization -- and discusses how money in politics is a tool used to perpetuate systemic inequality.

Foreword
By Eroc Arroyo-Montano, United for a Fair Economy
This racial wealth gap is not unique to the United States’ relationship with Puerto Rico. The U.S. has always enacted policies that systemically harm communities of color, as well as women, people with disabilities, and trans and queer people… Black and brown people in the U.S. today experience a disproportionate wealth divide because of both historical and contemporary barriers to wealth creation among communities of color. We are poor because the United States has grown rich off us.

RACIAL WEALTH GAP
By Riahl O’Malley, United for a Fair Economy
The crisis in Puerto Rico is part of a broader story of wealth creation in the United States. The structures used by elites to extract wealth from Puerto Rico are similar to the structures used to extract wealth from communities of color in the U.S. mainland. Many of these structures began when the Americas were first colonized, and still exist today. If we plan to truly address economic and political inequality, we must analyze how corporate elites have used their money and influence to create laws to amass wealth that devastates communities of color.

The case of Puerto Rico vividly demonstrates how unchecked corporate money and power can strangle democratic politics. Of course, for Puerto Rico, these necessary reforms are only part of a solution. To promote true political, economic, and racial equality for Puerto Rican people, and all people marginalized by systems of oppression, we must build an intersectional and authentic solidarity movement. Authentic solidarity requires working together to dismantle all systems that sustain oppression. To do that, we must first acknowledge and provide education around all these systems.

To learn more about the history of racialized policies, and to see other examples of governmental boosts and blocks that help the lucky few at the expense of others, please visit our page http://www.faireconomy.org/boostsandblocks

For those interested in reading more from the author of the report’s foreword, UFE’s director of Cultural Organizing, Eroc Arroyo-Montano, see the recent article: The Niña, The Pinta and Hurricane Maria http://www.faireconomy.org/the_nina_the_pinta_and_hurricane_maria