Go BACK TO REPORTS or VIEW ALL RESOURCES

I Didn’t Do It Alone

I Didn't Do It Alone: Society's Contribution to Individual Wealth and Success, spotlights successful entrepreneurs and concludes that the myth of self-made success is destructive to the social and economic infrastructure that fosters wealth creation. The report was first published as a pamphlet in 2004 by Responsible Wealth (a project of United for a Fair Economy) and was co-authored by Responsible Wealth's current director, Mike Lapham.

"Self-serving stories of 'self-made' success may nourish the ego, but they mask the real ingredients of wealth creation and a strong economy. Where would the Forbes 400 be without public investment and infrastructure – from Google founders building on the Internet to Ross Perot and government contracts?" 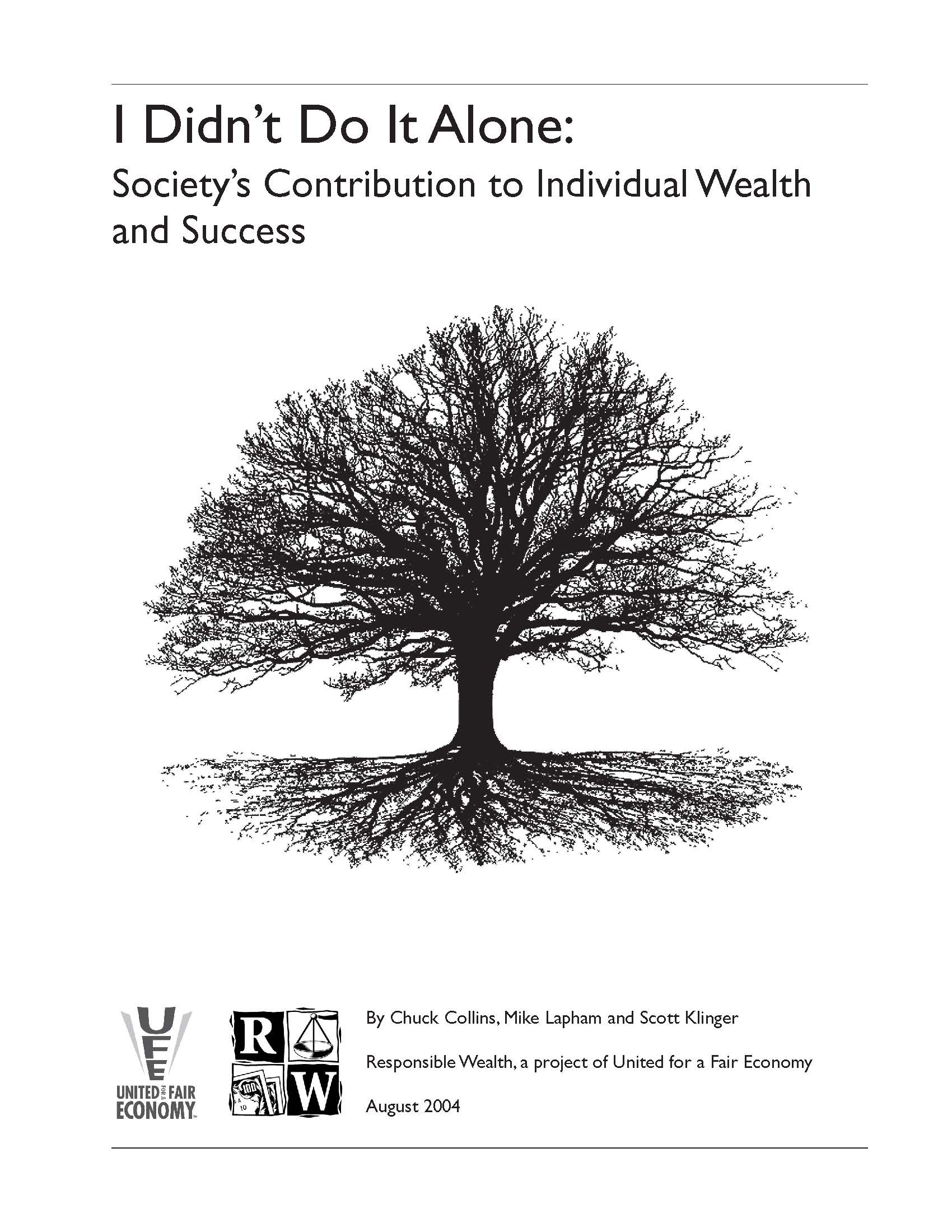 In fact, everyone on the Forbes 400 owes their wealth partly to a taxpayer-financed inheritance of public research and contracts; public schools and universities; communications, transportation and other critical infrastructure, and myriad government institutions from the Federal Reserve and the courts to the Treasury, Defense and Commerce Departments.

"It takes a village to raise a billionaire. Every taxpayer deserves some credit for Forbes 400 wealth," said Mike Lapham, co-director of our Responsible Wealth project. "Yet while the Forbes 400 richest Americans are doing better this year – their collective wealth rose $45 billion since 2003 – the average taxpayer is not. Median household income fell for the fourth year in a row last year."

Billionaires Warren Buffett, Ross Perot and Google's Larry Page illustrate the myth of the "self-made" label. They are all featured in Responsible Wealth's report, "I Didn't Do It Alone: Society's Contribution to Individual Wealth and Success."

Warren Buffett, No. 2 on the Forbes 400, attended a publicly supported state school, the University of Nebraska in Lincoln, and is quite clear that his investment wealth depends on America's social and economic infrastructure. "I personally think that society is responsible for a very significant percentage of what I've earned," said Buffett. "I happen to work in a market system that happens to reward what I do very well – disproportionately well."

Larry Page, No. 43 on the Forbes 400, co-founded Google, which went public this year. Page graduated from a state school, the University of Michigan, and then attended Stanford University for graduate work, where Google was born. Government grants underpin the lucrative research in Silicon Valley and at Stanford University. The Internet platform, without which Google would not exist, is built on a foundation of taxpayer-funded research and development.

H. Ross Perot, Jr., No. 40 on the Forbes 400, grew his company, Electronic Data Systems (later sold to General Motors), by focusing on computer systems and services for Medicare, a government program. The company's growth – and windfall profits – really took off when it began reselling the Medicare claims processing system it had developed for Texas Blue Cross under a research and development contract paid for by federal funds. By 1971, EDS owned 90% of the Medicare business in the country.

Responsible Wealth's report, "I Didn't Do It Alone: Society's Contribution to Individual Wealth and Success," spotlights successful entrepreneurs who credit society's investment in their success.

Jim Sherblom, a venture capitalist and former chief financial officer of the biotech firm, Genzyme, observed in the report, "The opportunities to create wealth are all taking advantage of public goods – like roads, transportation, markets – and public investments. None of us can claim it was all personal initiative. A piece of it was built upon this infrastructure that we all have this inherent moral obligation to keep intact."

The report concludes that if society's role in wealth creation withers from inadequate revenues and political will, then opportunities for wealth and innovation will shrink. Entrepreneurism, the economy and society will all be undermined.

Responsible Wealth (a project of United for a Fair Economy) is a national network of business people and affluent Americans concerned about deepening economic inequality who advocate for widespread prosperity.