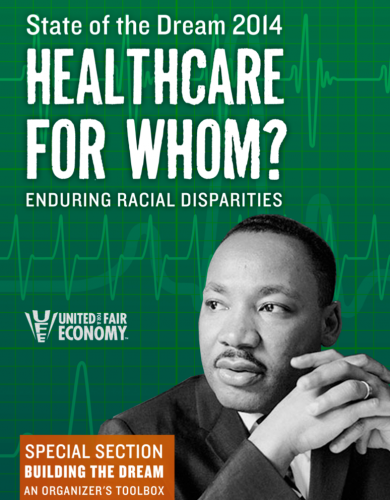 Boston, MA (January 16, 2014) – Dr. Martin Luther King, Jr., once said, "Of all the forms of inequality, injustice in health care is the most shocking and inhumane." This quote is the touchstone of a new report – State of the Dream 2014: Healthcare for Whom? Enduring Racial Disparities – the 11th Annual MLK, Jr. Day report from United for a Fair Economy (UFE).

State of the Dream 2014 documents the heavy toll that continued racial segregation and concentrated poverty takes on people's health. High poverty communities often lack adequate healthcare facilities, full-service grocery stores, and green space to walk or jog. These communities also face higher exposure to lead and other toxins, mold, and even industrial pollutants. These factors, coupled with the physical stress of caring for one's family amidst high crime rates, poverty, and persistent racism all exact a price. People of color face the brunt of this injury as poor Blacks and poor Latinos are significantly more likely than poor Whites to live in such high-poverty neighborhoods.

Dedrick Muhammad of the NAACP, and an advisor on the report stated, “Governors and state elected officials across the nation have an opportunity to begin reversing the historical and persistent racism that continues to steer families and individuals toward poverty and poor health.” He adds, “Their commitment to deny underserved communities and communities of color access to basic healthcare equates to a commitment to fight against justice for all.”

The state fights over Medicaid expansion under the Affordable Care Act (ACA) – also known as Obamacare – deepen the insult to an already difficult situation according to the report. “It’s bad enough that communities of color face additional health hazards and stressors,” adds Brian Miller, executive director of UFE and author of the report. "Now we have politicians around the nation trying to block health insurance coverage that would have otherwise been extended to millions of low-income Americans.”

Following the Supreme Court ruling in 2012, states were no longer required to expand their Medicaid programs as provided for under the ACA. Since then, 25 states – all but three headed by Republican governors – have declared their commitment to NOT expand their Medicaid programs in 2014. The nearly 5 million who are affected by the 25-state coverage gap are disproportionately people of color.

Blacks make up only 13 percent of the population according to the new report, but account for 27 percent of those who will fall through the GOP's 25-state coverage gap. The disparate impact on African Americans is in large part a result of conservative states in the South, where large numbers of Blacks reside, rejecting the ACA's Medicaid expansion.

Latinos make up 15 percent of the population, but account for 21 percent of those who fall through the new 25-state coverage gap. Over 1 million of the nearly 5 million who will go without health care because of the 25-state coverage gap live in Texas, a state that is 38 percent Latino. Florida has the second largest Latino population among the 25 states currently not expanding coverage.

Rev. William Barber, leader of the Moral Mondays Movement in North Carolina, writes in the foreword, “The greatest myth of our time is the notion that extreme policies harm a small subset of people such as people of color. However, these policies harm us all. What we’ve seen in North Carolina and other parts of the country are wealthy extremists playing on the fears of working class and white people… Our job is to unpack the truth about these extreme policies and how they adversely impact all people.”

“We have a history in Alabama of enacting laws and policies that favor wealthy residents, while ignoring the needs of the underserved,” said Dollie Hambrick of Alabama Arise, whose group is working to get Alabama to fully expand their Medicaid program under the ACA. “On top of that, our leaders have a long-standing resentment of the federal government. Those factors have been huge barriers to ACA implementation in Alabama, but the people we meet in rural communities and low-income urban neighborhoods have had enough.”

Hambrick adds that the community in Alabama is moving to take action. “They’re gathering in community meetings to share information and encourage others to get involved. And they’re letting the Governor know that expanding health coverage can help Alabama overcome our history of destructive health disparities.”

As originally designed, the ACA established health insurance exchanges to make it possible for middle-income Americans who don't get healthcare through their employers or other means to buy policies, with tax credits available to assist with the cost. However, a key provision of the ACA is the expansion of existing Medicaid programs to individuals up to 138 percent of the federal poverty line. It is this second provision that is currently under assault across the nation.

In addition to pressuring the 25 states to expand their Medicaid programs, the report calls for bolder action. “As long as we depend largely on employers to provide health insurance, our healthcare system will simply reflect the vast racial disparities of employment,” adds Miller. “People of color, who are often relegated to low-wage, part-time, and temporary jobs that offer little or no health insurance, are the ones left behind in such a system. The ACA's Medicaid expansion attempts to address this shortcoming, but the real fix is to move to a universal, single-payer system.”

The report lifts up Vermont's new single-payer system, scheduled to come online in 2017. Leveraging the rules and funding from the ACA, Vermont's new Green Mountain Care will provide health insurance to all residents, including undocumented immigrants who work in the state's many dairy farms.

“The fight today is over implementation of the Affordable Care Act, and ensuring that as many Americans as possible get health insurance,” adds Miller. “But long-term, we need to look at the real underlying causes, break up concentrated poverty, and begin promoting a more broadly-shared and inclusive prosperity. That's the movement we hope to support with this report.” The report includes an array of organizer tools and resources, including workshop modules that can be used at local union halls, worker centers, and church groups to stimulate discussion and action around the racial wealth divide.

State of the Dream 2014: Healthcare for Whom? is available as a free download at http://www.faireconomy.org/dream.