NEW REPORT:
Forbes 400 Reinforces Flawed "We Built It" Claims &
Misleads About Wealth & Opportunity in the U.S. 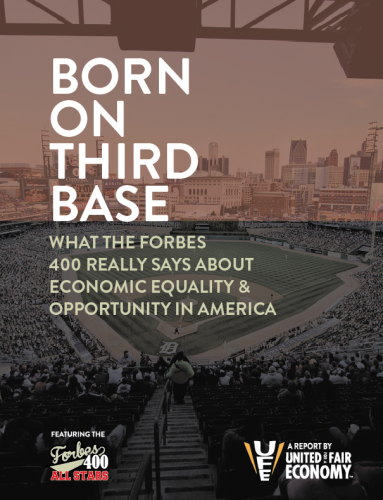 Boston, MA—Forbes Magazine calls their list of the 400 richest Americans the "definitive scorecard of wealth in America," but a new report asserts the magazine is misleading. Born on Third Base: What the Forbes 400 Really Says About Wealth & Opportunity in America, released this week by Boston-based non-profit United for a Fair Economy, examines the sources of wealth for members of the Forbes 400 and uncovers the role of inheritance and privilege in economic mobility. The report urges Forbes to stop glamorizing the "self-made man" while minimizing the other factors in wealth accumulation, including tax policies, birthright, gender, and race.

"Forbes spins a misleading tale of what it takes to become wealthy in the U.S. by understating the overwhelming impact of birthright and privilege," said Shannon Moriarty, co-author of the report. "Economic success should be a function of achievement, not just a guarantee for people lucky enough to be born into wealthy families. The Forbes 400 shows that birthright and family privilege are still very much at play in the American Dream."

The report explains that the net worth of the Forbes 400 grew fifteen-fold between the launch of the list in 1982 and 2011, while wealth stagnated for the average U.S. household. In 1982, the wealth threshold for the Forbes 400 was $75 million; today, every person on the list is a billionaire.

Women accounted for just 10 percent of the list in 2011, and nearly 90 percent of those women inherited their fortunes. The whiteness of the Forbes 400 list also makes clear the racial wealth divide. In the past two years, just one African American made the list. "Instead of asserting that ‘the American dream is very much alive,’ Forbes should acknowledge that the opportunity to become wealthy has never been equally shared," said Moriarty. "The billionaire members of the Forbes 400 are exceptions, not the rule."

Born On Third Base takes Forbes to task for their misuse of the loaded term "self-made" and the undervaluing of privilege and social capital in financial success. "We disagree with Forbes claim that 70 percent of the list made their fortunes entirely from scratch," said Brian Miller, executive director of United for a Fair Economy and co-author of the book The Self-Made Myth. "The 'self-made' and 'I built this' narratives wrongly present the opportunity to become rich as equally attainable by all people in today's highly stratified society. Forbes’ story also ignores the important contributions of others and the role of government in the success of the wealthiest Americans."

"Tax policies have for decades been tilted in favor of the very wealthy," said Tim Sullivan, federal policy coordinator at United for a Fair Economy. "Tax rates on capital gains have been slashed to historic lows, which is of particular benefit to the likes of the Forbes 400." The report explains that the wealthiest 0.1 percent (including those on the list) receive half of all net increases in capital gains. "Drastic cuts to the federal estate tax made under George W. Bush and extended with the 2010 Obama tax deal have made it easier for wealthy families to keep and amass even greater fortunes," said Sullivan.

"As was once said of President George W. Bush, many of those on the Forbes 400 were ‘born on third base’ but claim to have ‘hit a triple,’ and the Forbes 400 list perpetuates this falsehood," said Moriarty.

United for a Fair Economy is launching a petition to coincide with the release of the Forbes 400 and the Born on Third Base report, asking Forbes to tell the whole story of wealth and opportunity in the U.S. Download the report and see the petition at http://www.faireconomy.org/BornOnThirdBase2012. Co-authors of Born on Third Base and authors of the book The Self-Made Myth are available for interview.

United for a Fair Economy is a national, independent, nonpartisan, 501(c)(3) non-profit organization working to raise public awareness of the destructive effects of concentrated wealth and power and supporting the movement for greater economic equality. Learn more at http://www.faireconomy.org.