New Report: Flip It to Fix It 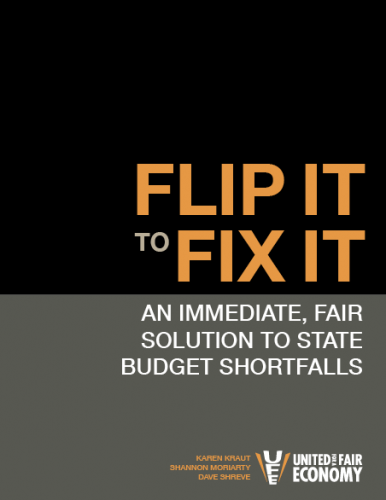 States are facing their largest decline in revenue on record. The response from elected officials has been downright harmful, shortsighted, and economically unsound. Cutting to get out of a deficit is like digging to get out of a ditch. It puts everything we value at risk. And as we state in our new report—Flip It to Fix It: it doesn’t have to be this way.

A new study, released today by the Tax Fairness Organizing Collaborative at United for a Fair Economy, asks the question: What if there was a solution to state deficits that would raise significant revenue, encourage investment, and create jobs—without cutting vital public services? And what if the revenue required by such a solution could be generated solely by making tax systems as fair as most Americans think they ought to be?

Every single state would benefit tremendously by inverting their existing tax structure.  All combined, states would generate an additional $490 billion in revenue—immediately eliminating their deficits with cash to spare for investing in job creation and other stimulants to the economy. The flipped structure would be progressive, which is not only more economically sound, but also consistent with the majority of Americans’ perception of “fair.”

Read the full report in our resources section.