UFE’s support for the Raising Wages NC coalition continues with a series of popular education trainings on wages.  Raising Wages NC and the Communication Workers of America (CWA) are partnering to train individuals and organizations to become popular education trainers in the CWA Runaway Inequality curriculum.  After completion participants become trainers themselves, able to run their own Runaway Inequality trainings.

There are two separate components to the training series.  First is the Runaway Inequality workshop itself, which was held on Monday, February 26.  In late March, we will hold a two-day follow up training, equipping people to run and facilitate their own workshop.

Attending were trainers for North Carolina and regional organizations working to raise the minimum wage, including Action NC and Raising Wages NC staff, CWA union members, community organizers, and many others.  Over 20 individuals attended.

The training encourages community organizing and power building around Raising Wages NC’s mission to raise the minimum wage.  After completion of the second training, participants will work to facilitate a workshop in their own communities. 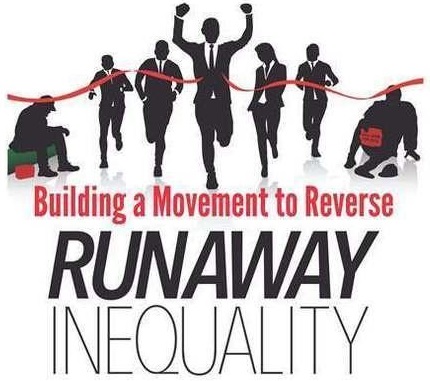 The curriculum empowers trainers to educate their community on the deliberate attack on the working class over the last 40 years.  For decades, corporations and Wall Street have lobbied to cut taxes for themselves and  eliminate financial regulations, all while working to damage the power of working people and unions.  When powerful people are allowed to write the same rules they have to play by, problems can occur.  When we allow politicians to be bought with campaign contributions, we let the wealthy rewrite regulations.  They start changing rules to help themselves.

There is no cost for the trainings.  Raising Wages NC worked to provide assistance and funding to reduce barriers that could have prevented attendance.