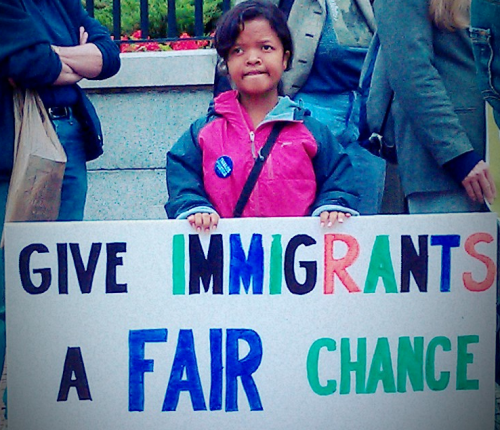 The immigrant rights movement recently enjoyed a moment of victory in Massachusetts. The Student Immigrant Movement (SIM), an alliance of young immigrants and supporters, completed an 11-day vigil in front of the Massachusetts State House, protesting hateful budget amendments that would have stripped the immigrant community of civil and human rights, and thus, the Commonwealth of humanity.

One SIM member described his experience:

“I did not feel comfortable, no one did. Some people would pass by and say horrible things to us. One man made a hand gesture as though he was shooting us one-by-one. It scared me. But our cause is important, and we knew we had to step up.”

The result of SIM’s tireless efforts was the removal of 8 of the 9 anti-immigrant amendments. The only amendment to pass denies access to the state health plan for undocumented individuals. Such an affront to human rights, unfortunately, may only be resolved with intelligent and holistic action at the federal level.

The failed budget amendments would have encouraged racial profiling and housing denials to children and families, and would have mandated an E-verify system for employers, which would have been a terrible idea for several reasons. Gabriela Garcia of Change.org explains:

“E-Verify has proven costly and ineffective. It frequently misidentifies Latino and new American citizens with common last names as undocumented and fails to identify 50 percent of undocumented workers as unauthorized. Furthermore, opponents argue that its implementation drives work further off-the-books.”

A radically conservative and near-sighted movement driven by the corporate-funded Tea Party pushes relentlessly to antagonize and deny rights and services to immigrants, document or not. A common argument is that undocumented workers do not pay taxes, and therefore should not have access to public services. This is unequivocally false.

In 2011, undocumented workers paid more in taxes than even some major U.S. companies, such as General Electric, which paid zero tax dollars into the public coffers. And yet, these companies continue to enjoy government subsidies and the protections and benefits of being a U.S.-based company. Meanwhile, undocumented workers are scapegoated and scrutinized, and will receive no publicly administered services in return for the billions of dollars they contribute in state and local taxes.

Social progress, such as that made with the Abolitionist and Civil Rights Movements, has never come easy. It requires an informed and unified movement that transcends any individual agenda, is able to penetrate petty politics and maintains the common good of all people at its core. Immigrant rights groups, like the Student Immigrant Movement, need exactly that now more than ever.