We Built It Together 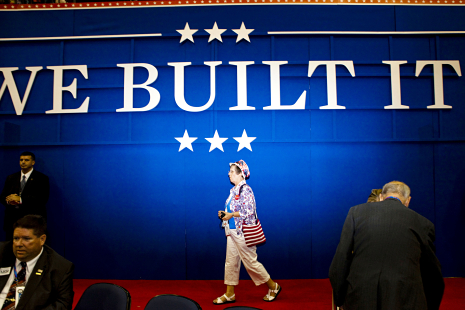 Hammering an out-of-context quote from President Obama, "We Built It" became the theme of last week's Republican National Convention.

Meanwhile, fact checkers, writers, and progressive organizations fired back, both recounting the full quote from President Obama (his "You didn't build that" comment was referring to the roads and infrastructure, not the businesses themselves) and making the case for why businesses do, in fact, depend heavily on public investments.

This debate is only getting started. As NRP's Ron Elving wrote, "The central theme… in Tampa is about to become the party's mantra for the fall." So get used to a lot of talk about who actually built it, what they built, and why it matters. Looking beyond this one election, this is a critical debate about core values that shape our views on taxes and the role of government in our society.

In March, months before Obama's statement in Virginia, we published a book entitled The Self-Made Myth: And the Truth About How Government Helps Individuals and Businesses Succeed. In it, we contrast the "self-made myth" with the "built-together reality." Little did we know when we came up with the term "built-together," that this would become a defining theme of this election cycle.

The stories of business leaders tell a more honest and complete story of their success. Jerry Fiddler, founder of Wind River Systems (sold to Intel for $880M), talks about publicly-funded research and land-grand universities as key to his business success. Jim Sherblom, former CFO of the Genzyme, notes the importance of the SEC in providing a stable financial market. Kim Jordan, CEO of New Belgium Brewing, declares "beer is heavy" as she emphasized the importance of roads and transportation infrastructure in making her business possible.

We also investigated people like the Koch Brothers who graze their cattle on federal land and use eminent domain law for their pipelines. We examine Donald Trump, whose father constructed FHA-guaranteed homes for US naval personnel, leaving the junior Trump with a sizable inheritance. Similarly, Ross Perot's software business rode to success on the backs of the federal Medicare program.

Governmental supports and public infrastructure are an important part of any success story in America, along with a bit of luck, various head starts in life, privilege, and the contributions of others, including the many employees (The AFL-CIO responded to last weeks convention theme with an email titled, "No, WE built it"). Such an honest and more rounded assessment helps put the "self-made" narrative in perspective.

But that's not what we heard last week. We heard, "I built it," and from that bootstrapping narrative comes a host of policy implications.

If they can convince us that the successful business leaders achieve their wealth through gumption and hard work alone, then extreme inequality is simply the result from their exceptional intelligence and hard work of those at the top …and the sloth of others. Efforts to rein in that inequality are thus viewed as "punishing success." Efforts of workers to demand a fair wage are viewed as "thuggary." Taken to its logical conclusion, this frame helps to fuel an anti-tax, anti-government, and anti-worker agenda.

The business leaders we spoke with understand that their hard work was matched in many ways by the contributions of society, not to mention a good bit of luck. As such, they take a very different view on taxes and the role of government, actively speaking out for a strong estate tax and ending the Bush tax cuts for top income-earners. Many also insist on paying their workers fair wages, or even sharing ownership with their workers.

In the weeks ahead, we have an opportunity to open a more meaningful discussion about the origins of individual and business success, and in doing so, shifting the public policy debates in positive ways. We sincerely hope our book, The Self-Made Myth, is a valuable contribution to this discussion. But we also need writers, bloggers, and organizers across the nation to pick up on this message. If we're going to create a new narrative, we'll need to "build it" together.
Imported Blog Resources: Inequality Topic: Taxes Resources: Taxes Resources: Income Resources: Wealth
Do you like this post?
Support our work. Give here:
Tweet