We Stand with Charleston

We at United for a Fair Economy would like to send our deepest condolences to the families of those killed in South Carolina.  We are saddened not only by this act of terrorism and hate, but by the system that enables such violence to take place.  This is not an isolated act, but a continuation of a long history of violence carried against black people.

The same system that has tragically ended so many black lives is the system that produces economic inequality.  In a funeral service following the bombing of a Birmingham church in 1963, Martin Luther King Jr. said, "[the victims] say to each of us, black and white alike, that we must substitute courage for caution. They say to us that we must be concerned not merely about who murdered them, but about the system, the way of life and the philosophy which produced the murders." Today, for every dollar of wealth held by white families, the average black family holds only six cents. The one-percent owns 40% of the wealth in this country the poorest 90% shares only 23% of the wealth. While so many families are struggling for their very survival the one-percent are making record profits.  These systems, of state-sponsored violence and economic inequality, are one in the same. We cannot address one without the other.

We believe strongly in the power of social movements fighting against racism, inequality and oppression.  The organizers and activists leading the #blacklivesmatter movement and service and fast food workers fighting for $15 dollars and the right to join a union, black people and their allies, both non-black people of color and white people, are taking action against our country's long history of violence and exploitation.  May there be justice for families in Charleston who have lost their loved ones and may those of us fighting for justice strengthen our resolve and take bold action in the struggle against racism and oppression. 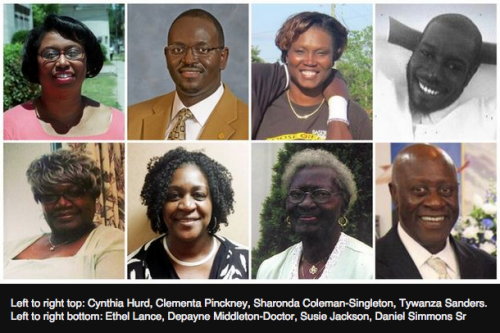