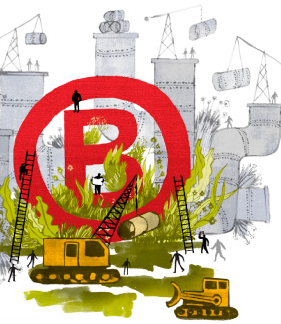 Corporations are regular targets for attack by the progressive movement, and rightfully so. The biggest among them have, through morally unconscionable business practices and political actions, wrought havoc on the world — all in the name of profit.

Despite the neoliberal crusade to codify the notion of corporate personhood, it's the human beings that make business decisions who should be held accountable for negative social and environmental impacts of their businesses. Dave Johnson of the Campaign for America's Future explains:

But, does the responsibility of corporate leaders — to act in the interests of the corporation and the shareholders — have to be to ensure profit alone?

A movement is brewing to redefine corporate purpose. B Corporations, or Benefit Corporations, seek to "use the power of business to solve social and environmental problems." What sets B corporations apart from traditional corporations is that companies are required to create a material positive impact on society and the environment and are held to higher standards of accountability and transparency.

Under the B corporation model, businesses don't only account for the needs of shareholders; certified companies are mindful of all stakeholders, which also includes workers, consumers and even the communities in which they operate.

This effort has been a long time coming. A poll taken over a decade ago showed 95 percent of people believe corporations should sacrifice profits to improve conditions for workers and communities. Either those results slipped through the cracks or some of the largest U.S. corporations simply don't give a rat's ass. 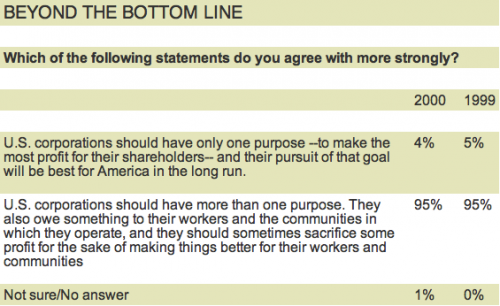 Five states have already passed legislation recognizing B corporations, and six more, including economic giants, California and New York, have it on the table. Even as legislative efforts are launched in every state, the B corp model will still face legal tests to expand its reach. But, Good magazine's Tim Fernholz is optimistic:

"[T]he momentum behind the legal changes—and the bipartisan majorities that have so far enacted them—signal the beginnings of a sea change in our expectations for the private sector."

Visit www.bcorporation.net to learn more. To get involved in the sustainable business movement, check out our friends at the American Sustainable Business Council (ASBC) and Business Alliance for Living Local Economies (BALLE).