Outside, a steady rain soaked the streets of East Boston, an immigrant neighborhood so new to gentrification that Spanish mercados have yet to give way to cafes selling lattes and craft beers. On the windows of the East Boston Neighborhood Health Center’s Education & Training Institute, the rain coursed down the panes like tears... 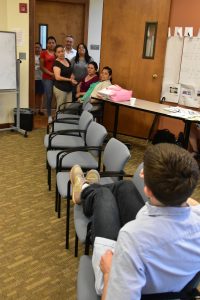 Inside, wearing a shirt that said “No Bad Day in Aruba,” a woman was crying. Of course, East Boston isn’t Aruba.

And truthfully, Saturday wasn’t a bad day for the woman, either. In some ways, it was a relief. There, in a room filled with 15 immigrants, she could tell her story. Milagros Barreto, coordinator for the Immigrant Worker Center, put her arms around the woman, offering comfort and Kleenex. No name for this woman, she was too ashamed.

At that moment, Barreto’s work wasn’t about job safety or wage theft or the economy or any of the other important issues that draw people to trainings held by the Immigrant Worker Center, a project of the Massachusetts Coalition for Occupational Safety and Health, known as MassCOSH.

“This space opens her heart,” Barreto said. “It opens hearts and minds.”

On the agenda for the Immigrant Workers Center that day was a session of the Center’s Leadership Institute.

To lead, knowledge matters, so on that rainy Saturday, the knowledge was in the form of economic training from Riahl O’Malley, director of education for United for a Fair Economy, a national grassroots group based in Boston that challenges the concentration of wealth and power, working toward a resilient, sustainable and equitable economy.

Other sessions focus on media training, advocacy, the political process, group dynamics and laws and regulations involving wages, safety, sexual harassment, discrimination and, so important these days, retaliation. Bringing the workers together was longtime MassCOSH organizer Erika Sanchez. Sanchez first came to MassCOSH seeking help for a community member. That led to volunteering and eventually, she joined the staff.

“She’s a leader in her community,” Barreto said.

Lots of organizations talk about worker empowerment and leadership, but MassCOSH takes it a step further, and makes it part of the deal, a quid pro quo for services rendered.

“We don’t just want to provide you with an attorney and then say goodbye,” said Sugarman-Brozan.  “We want workers to commit to staying connected.”

Through MassCOSH, the Immigrant Workers Center has connections with lawyers who will help with workers’ compensation and wage theft issues. In Massachusetts, a worker’s immigration status is irrelevant when it comes to receiving medical care and lost wages because of a work-related injury. Employers are required to carry workers’ compenation insurance and when they don’t, MassCOSH’s partner lawyers can help workers get the legal and medical help they need, plus fight off any retaliation attempts.

What does the Center want in return?

“They have to commit to coming to regular meetings. They have to be trained and become trainers. They have to provide peer support. That’s incredibly valuable. They have to become leaders and activists,” Sugerman-Brozan said. “They support each other. `Here’s what happened to me. Here’s a doctor I really like,’ so that generally, they aren’t feeling so alone.”

They are expected to recruit members from their social circles, workplaces and churches. If there’s a hearing, a handful are required to show up, wearing MassCOSH t-shirts, to show the judge and lawyers that the injured worker has people in his court who understand the law. And, they have to agree to donate one percent, up to $500, of whatever financial settlement is achieved back to the Worker Center.

All of this isn’t simply bullet points on a website. To get the help, the workers have to sign an agreement, showing both sides are serious.

“We are focused on building the leadership of workers and empowering them,” she said.

On Saturday, speaking in careful Spanish, O’Malley distributed a package of charts showing income distribution in the United States by gender and race, the number of deportations, programs that lead to middle class lifestyles — the GI Bill, Social Security — and those that block it, including immigration quotas and redlining.

But for his first question, he asked the group to divide into pairs and tell each other how the economy is doing where they live and work. Later they were invited to share their immigration stories, again in pairs. This was the one that drew tears.

Wiping tears from her eyes, the woman, said she had never learned to read and write. As a young girl growing up in El Salvador, she was sexually abused, with her abuser telling her that if she told anyone, he’d kill her father and her mother. Eventually, she escaped to the United States, carrying her shame with her, unwanted baggage.

“Because I don’t know how to read and how to write, I have to do the worse jobs,” Barreto said, relaying the words from the woman, who was probably in her mid-50s. Her lack of literacy, coupled with her lack of documentation, made her more vulnerable than most. That’s why the education she’d gain that day, one Power Point slide at a time, would make a real difference – and maybe even make it a good day.

Getting the coffee ready for the leadership training in East Boston, Barreto talked about why the economics lesson is so important. “Our goal is to go deeper into different topics, why we do rallies. It creates an understanding.”

The real understanding begins when a worker is injured or isn’t paid. Before that, Barreto said, they stay focused on working. “They come here from another country with a goal, to send money home. They don’t have time for workers’ rights. People are just dedicated to work, work, work, just to earn money.”

Often, they are working two and three jobs, to the point that it takes a toll on their bodies, she said. Injury is almost inevitable. Then, unable, at least for a time, to work, they begin new lives of advocacy.

Jorge Estrada’s new life of advocacy began several years ago when he hurt his back lifting a one-hundred-pound bag of potatoes at the restaurant where he worked. He went to the hospital, got a doctor’s excuse to miss two days of work. When he returned to work, he noticed he didn’t get paid for those days. When he raised the question, the boss said he didn’t pay sick time.

Estrada, 62, who came from Mexico in 1975, found out about the Immigrant Workers Center and MassCOSH from someone handing out leaflets at a train station. He called, he got help and now he’s active, campaigning at the state house for measures to stop wage theft. “I’m not very smart,” he said, “but I’m learning. I used to be very shy.”

Estrada now works at a different restaurant where he’s treated well. The owners like his work ethic, and Estrada believes they respect him because he stands up for his rights on the job and encourages his co-workers to do the same.

“The owner saw me on TV protesting,” Estrada said, “and he saw that I know my rights. I think they respect me more.”

From where Estrada was sitting, he could look across the room at Hugo Perez, 42, who, until he was injured in June, flipped burgers and boiled pasta at a restaurant in Boston, sending money home to his family in Colombia.

Then, one day, Perez nearly fell off a step in the kitchen. He came down hard on his knee, which swelled. The head chef tried to convince him that a little rest would fix it, but eventually Perez went to the hospital.

There was no sick pay.

These days, his knee is improving and the Center found him a lawyer to help with workers’ compensation. And, because of the agreement, Perez is attending the sessions, although, he says, emotionally he’s not strong enough to be a leader. “The financial situation is affecting me a lot,” he said. “When you stop getting money and you stop giving money, you feel like a loser.”

Mirna Santizo, 62, hasn’t returned to work yet either.

Santizo came to the United States from Guatemala more than a decade ago. Eventually she got work in a recycling company, separating soda cans and plastic soap containers from the line of trash passing before her. The work was hard, the pace fast and the humidity made it almost unbearable.

Then one day at work about two years ago, “I started to feel a pain my head. I started feeling dizzy, like I was going to fall. I was chewing gum and the gum fell out of my mouth, because my face turned to one side,” she said.

Hospitalized with a stroke, Santizo got a lawyer to help her, but the lawyer did little and her problems were compounded by translation issues. She was injured by a “derrame cerebral,” a cerebral hemorrhage.  Somehow in translation, the lawyer thought it was  “rama,” a branch had fallen on her head.

Santizo no longer works at the recycling plant, but she keeps in touch with her co-workers. “Three people in the last month have fainted there because of the heat,” she said through a translator. “I talk to them, but they are afraid, because they think they are going to be fired.”

Barreto shakes her head. Yes, it’s a different time now. Yes, President Trump has come out tough against immigrants, but, even with that, she asks rhetorically, “What has changed?”

“Yes, it’s super hard and people are in the shade, afraid to come out,” Barreto said. “But you still have the right to go to OSHA. You still can file retaliation claims. You can still go to court. The rights are still there.”

“That’s why we still need the worker centers.”